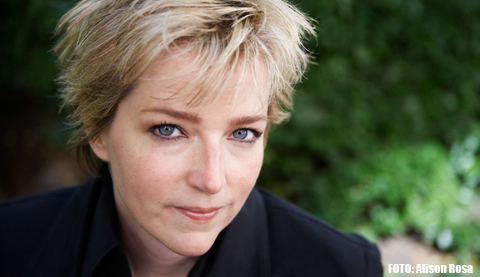 Karin Slaughter, welcome to this interview for Deckarhuset !

You write unusually violent and bloody stories, why?

I don’t think of them as unusually violent or bloody.  My main focus as a writer is to use violence as a means of talking about greater issues affecting society such as domestic violence, child abuse and rape.  I write about these matters in a frank and serious way because I think that readers want an understanding of not just what happens, but what happens next—as in, how does a woman who has suffered horrendous abuse put her life back together?  How does a woman who has been raped manage to trust again.  I delve deeply into the lives of my characters and their emotional responses to the sorts of crimes they see.  The social aspects have always been my focus.  I’m not interested in violence for violence’s sake.

Most of the really raw violence I have come across in novels are in stories written by men, why do you think that is?

I think that men have an easier time getting away with writing about violence.  Mark Billingham and Jeff Deaver seldom get asked about the violence in their novels, but I think that both of these authors are very dark (and exceptionally good at what they do).  On the other hand, women like Mo Hayder or Tess Gerritsen or I tend to get a lot of attention when we take on the same issues in the same way.  People expect women to be softer, I suppose.  The dichotomy is that in most countries, women buy the majority of the books.  In the US and UK, for instance, almost 85% of all readers are women.  So, we have always been interested in this subject matter.  I think it’s about time we started not just writing about it, but bringing the perspective of women to the topic of violence.

It seems more and more common that authors use made up places instead of using cities and places that really exist. Why is that?

I write two different series—one is set in fictional Grant County and the other is in Atlanta, which of course is a real town.  I find it much easier to be in Grant because I can make up roads and neighborhoods.  I’m always so nervous when I write about Atlanta, even though I’ve lived here more than half my life, because I’m sure I’ll get something wrong and some helpful reader will write a terse letter outlining my mistake.  I find it much easier to be in a completely fictional world, as I’m sure most writers do!

Read the rest of the interview in English…