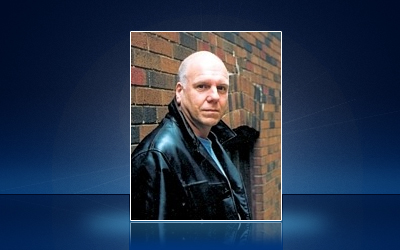 I am extremely happy to welcome none other than Peter Robinson to Deckarhuset!

Hello Peter,
I am so happy and excited that you have taken some time off from your busy schedule for this little e-mail interview. I will cut right to the chase and start with the questions right away…

First of all, where did you get the inspiration for Detective Chief Inspector Alan Banks? Is there a lot of Peter Robinson in Alan?

I think Banks is a character who has evolved over many books, rather than someone who was born fully formed. When I started writing the series back in the mid eighties, I had absolutely no experience of the police, other than running away from them! I had read very few crime novels, and the ones that had most impact on me were the Maigret books, by Simenon, Maj Sjöwall and Per Wahloo’s Martin Beck series, Nicholas’s Freeling’s Van der Valk, and Raymond Chandler. So I suppose if I was picking up influences from my reading, Banks is a combination of Maigret, Martin Beck, Van der Valk and Philip Marlowe! But I don’t really think that is the case. He was just my idea of an interesting character who happened to work as a detective. I wouldn’t say there is a lot of Peter Robinson in him, but we do share some social and political views, tastes in music and drink and so on. I think I eat much more healthily than he does, though, yet I don’t manage to stay quite as thin and fit. I couldn’t do his job and he couldn’t do mine.

I read “Aftermath” (“I ondskans spår” [translates to “In the tracks of evil”]) a few months ago and wrote the following about it on Deckarhuset: “…it doesn’t matter if you like this book or not, after you start reading it’s impossible to put it down!”. The book is both darker and scarier than a black hole! (and I love it!) but don’t you scare yourself sometimes with some of the stuff you come up with?

I must admit that Aftermath gave me a few nightmares! Really, though, for me it works the other way around. I don’t so much scare myself by what I write, but I write what scares me. I have a morbid imagination and can often imagine the worst in certain situations, and this often provides the basis for frightening scenes in the books. If I hadn’t become a crime writer I think I would have written horror. I get scared first, then I write about what scares me. The writing is actually cathartic, and I hate to think what kind of a wreck I would be if I didn’t gave that outlet.

…Of the books you have written, which would you pick out as the scariest one?

Probably Aftermath though I think the most recent in English, All the Colours of Darkness, is scary in a different way, more paranoia-inducing.

You have lived in Canada half you life (since 1974 if Wikipedia is correct?) Do you think this has affected your writing in anyway?

I’m sure it has. Of course, it gives a wonderful opportunity for critics who find the occasional transatlantic error in my books (and I admit there are some, to my shame) to dismiss me completely and say I don’t know what I’m talking about! However, I was born and raised in Yorkshire, spent the first twenty-five years of my life here, school, university, the sixties experience, the lot. Graham Greene once said that the first twenty years of a writer’s life contains his whole experience, and the rest is detail. I believe there is some truth in that. I have also kept in touch over the years, returning time and time again, and now I own a flat here, I spend close to half my time in Richmond, North Yorkshire, and the rest of the year in Toronto. More interesting to me is the way being an émigré has shaped my perspective on where I came from. I don’t think I would have been able to write about Britain in the same way—the class system, the landscape, the politics, the social mores—if I hadn’t been looking back at them from some distance. It’s all a matter of perspective, point of view, and I think spending so much time in Canada has mingled my nostalgia with detachment to produce a unique view. Some writers I know have to be in or near the place they write about, but I prefer a bit of distance, and what I sacrificed in terms of the day-to-day aspects of local life, I think I gained on the universal ones. Banks is a sort of Everyman, and readers anywhere can identify with the characters, their attitudes and what happens in their lives.

The next book is a collection of short stories called The Price of Love. It contains three Banks stories, one of which is a novella called “Like a Virgin”, which I wrote specially for the collection and have just finished. I really enjoyed writing it—about 125 pages or so is a nice length. I won’t tell you what it’s about, but there are a few surprises in it! That should be published first in the UK by Hodder this coming August. Right now I’m well into the next Banks novel, to be published next year. I don’t have a title yet, which is frustrating, but I’m sure I’ll find something suitable on my iPod song list.

What kind of books do you read yourself (do you ever read your own books after they have been published)?

I read all sorts of books, but never my own! I like non-fiction, and right now I’m reading a book called Liberation by William I. Hitchcock, about the last year of the Second World War. I’ll probably be reading Philip Kerr’s latest Bernie Gunther book next. I like to keep up with my colleagues—Ian Rankin, Mark Billingham, John Harvey, Laura Lippman, Michael Connelly, Robert Crais, George Pelecanos, Stuart MacBride, Simon Kernick and others—and I also try never to miss a new Ruth Rendell/Barbara Vine or P.D. James. I also enjoy the occasional historical crime novel, especially C.J. Sansom. Then there are other novelists I enjoy, such as Ian McEwan, Robert Harris, William Boyd, Sebastian Faulks, Beryl Bainbridge, Kate Atkinson and Pat Barker.

…do you know of any Swedish authors?

Absolutely. I think they are among the best writers of crime fiction today, and I’m not just saying that. As I mentioned earlier, I cut my teeth on Sjöwall and Wahloo, and of course I read Henning Mankell later. But recently I have discovered many more Swedish crime writers and have either read, or have in my to-read pile, Ǻsa Larsson, Stieg Larsson, Camilla Leckberg, Karin Alvtegen, Hǻkan Nesser and Ǻke Edwardson. I also read crime writers from other Scandinavia countries, such as Karin Fossum, Jo Nesbø, Matti Joensuu, and does Arnaldur Indriđason count?

I understand that Joyce Carol Oates was a tutor of yours when you attended university!? How was that? Do you still keep in touch and maybe give each other writing tips?

It was a good experience for me. I was writing only poetry then, and Joyce was very encouraging. Made me feel like a real writer. We don’t keep in touch, but I have received, and passed on, the occasional message when we seem to be have been following one another around the US on tour or something. I doubt that I could give her any writing tips. but I’d like to know how she manages to remain so prolific. I can barely manage one book a year, and even that feels like hard work!

And our always-recurring last question: Whom would you recommend we interview next? It could be anyone connected with “criminal fiction” in anyway?

Have you talked to John Connolly? I think he would be interesting to interview about the intersection between crime and horror.

We at Deckarhuset (especially Joachim and Erica who are HUGE fans) thank you for your time! We wish you all best and we can’t wait until your next book comes out!