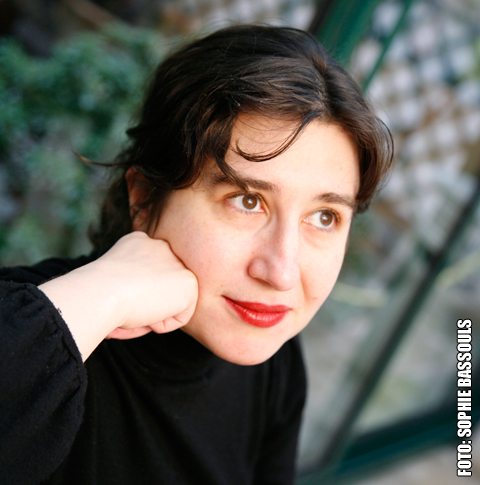 First of all, I must ask you to tell us a little about yourself since you are unknown to most of the Swedish people.

Hello! I was born in Tehran in 1970 in an Armenian family, and left Iran for France shortly after the revolution with my mother.

Then I stayed about 15 years without going back because those were times of terror. But when I was about 24-25 I started working as a journalist by going regularly to Iran. I was very surprised by the country I discovered then, very different from the fanatical country described by the media. I tried to show the real country in my papers, and now, as a writer, I try to do the same in my novels although I write fiction.

I have never heard of any other female crime writers from Iran, are you the first?

Actually I have never heard of any crime-writer, male or female, writing about Iranian society! Most Iranians in exile write either short stories (a Persian tradition since the great writer Sadegh Hedayat) or very autobiographical books (at least in France).

In Iran, there are many female writers. But I haven’t heard of any female crime writers. Anyway, the novels produced in Iran are often censored. Crime novels always treat of themes like good or evil, which, even if they don’t want to, have a strong political meaning. So it would be very difficult for an Iranian writer to produce a crime novel which is not either very ideological or completely censored!

What inspired you to take this project on?

Killing an ayatollah seemed a good way to show everything that goes wrong in Iran! Also, it is a way for me, who lives in France, to be there in Iran. When I write my novels I have the feeling I am actually in Tehran, drinking tea with my characters.

The very fascinating descriptions of Iran today, and also historically, are they pure fantasy or do they actually reflect the country as is/was?

The story in of course pure fiction but I tried to reflect very truly the reality of Iranian society and politics. As an exiled Iranian though my relationship to the county is full of fantasy. During at least 15 years I’ve lived far from it and with very deformed memories.

So when I started to write my book I tried to be very careful to show the real Iran and also to avoid showing only the point of view of the exiled Occidentalized Iranians. That’s why I created Leila’s character, the Islamic feminist, who is culturally very far from me and that I couldn’t have described so well, from the inside, if my novel wasn’t a fiction.

Has your novel been published in Iran, and if so, how was it received?

No it couldn’t be because of the censorship!

You have some interesting caracters in the story, for ex the feminist candidate for Presidency, do you have a role model for this woman?

Leila has a few models, but the main one is a woman called Azam Taleghani, daughter of an important ayatollah (like Leila), close to the Marxists (like Leila), who tried to run for presidency many times. But she is a fictional character with her own regrets and fantasies. In fact, she represents the idealists who are slowly defeated by the cynics, in Iran… but also in our societies.

Leila is the novel’s main character.

The book has increased my knowledge and also my curiosity of the country of Iran, was this what you hoped for, or did you write to “entertain” as most of the crime writers of today do?

Absolutely! But I hope it also entertained you!

I also tried to reflect the warmth and the closeness there is between Iranian people in everyday life. Even more because it is a dictatorship! I also hoped you sensed this warmth and closeness through my characters and their relationships with each other.

What kind of work do you do at the moment, anything you could tell us about your next book, for example?

Who killed ayatollah Kanuni? is the first novel of a series of at least three novels. I’ve almost finished writing the second volume of this serial. Narek’s character will come back to Iran four years after his first adventure and will go to Isfahan where a serial killer murders woman singers.

Although Narek comes back in this volume, the main character will once again be a woman…

And this novel, even more than the first one, tells us about the woman condition in Iran, where, among other things, women are not allowed to sing!

Thank you for taking the time to let us begin to get to know you and also Iran a little bit!

Thank you to you for your questions! Have a nice time!